Lorenzo Lotto, portrait of a young man, 1526, detail (foto: wikipedia)
My great interest in the art of the Italian Renaissance is based on my enthusiasm for its achievements in the representation of man. From early on I was fascinated almost exclusively by the expressive power of the portrait paitings of that time and less interested in the person of the sitters or in the biographies of their painters. My focus was on the self-evident and inexplicable presence that these images possessed and conveyed, the vividness that they preserved for centuries. The expression of the sitters showed proud self-confidence proving their position as individuals. The subtle and never flat realism of the artistic representation allowed to perceive the human as something very natural but at the same time precious.
My admiration for Italian Renaissance painting has led to the desire to deal artistically with a few masterpieces focusing on two main aspects of this art epoch: Beauty and Innovation.

The discovery of works of art of the classical age gave Italian artists a decisive impetus during the economic and intellectual awakening of the 15th and 16th centuries. But they not only admired, but also transformed and charged with contemporaneity and new meaning.

I had to do the same. If I wanted to deal with 'beauty' in the first part of my Renaissance series, it could only be fruitful with awareness of the historical distance of centuries and creative appropriation.

But for all my fascination with Michelangelo's artistry, it could not be a matter of copying or imitating his figure. I had to make it my own with my own means and give it a new meaning.

I decided to display the figur inversed, focus on the upper body only and omit book and background. The latter deprives the Sibyl of her background not only in the literal but also in the figurative sense. Her gesture then acquires an almost religiously charged symbolism of devotion and opening to a higher sphere. Consequently, I then also chose a shiny silver background of brushed aluminum, reminiscent of the shiny golden background of medieval religious representations, and gave this series the title 'angelus'. 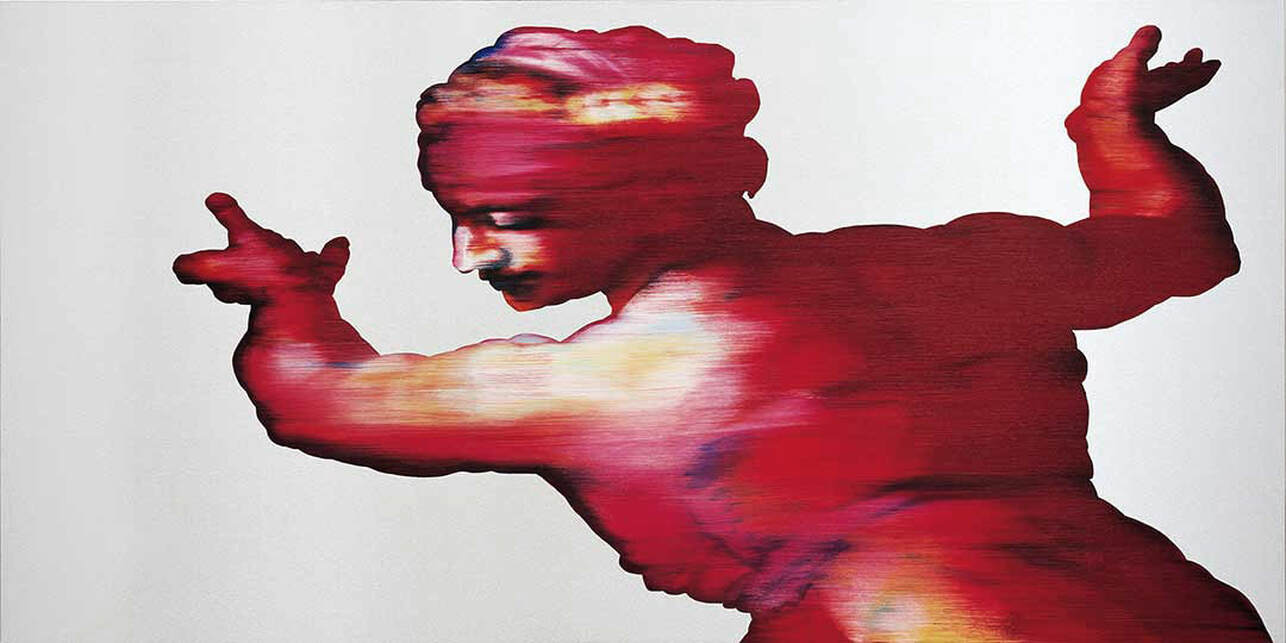 ReRe 1, angelus 14., oil on brushed aluminum. 100 x 200 cm. 2005.
Thinking in the 21st century hardly accepts the concept of the one, ideal and valid representation, but prefers the simultaneity of the different.

That's why the exhibition in which they were presented for the first time featured as many angels as the gallery could hold.
solo show 'angelus', Rudolf Budja Gallery Vienna, 2005

The second aspect that fascinates me about Renaissance art is its drive for constant innovation. The artist's desire and aspiration to surprise the viewer with something new and in no way bore both of them.
It would not do justice to the outstanding position of this masterpiece if I did not also try to make something new that has not been done before.

It is striking to see that Parimigiano has not painted his face deformed according to the optics of a distorting mirror. There are different explanations for this by art historians. One of them is that the artist, known as vain and particularly attractive, did not want to disfigure his likeness. I am rather a supporter of the consideration that the time was not yet ripe for a deformation of the face of a human, who in the religious conviction of the painter´s time was created in the image of God.

This inspired me to do just the opposite and focus only on the face, deforming it as much as possible following the laws of a distorting mirror.
The oil paint thus changed its character completely, lost its materiality and merged with the sphere. The face no longer seemed to be painted on the sphere, but lived somewhere inside, it seemed to press against a glass hemisphere from the inside.
In yet another way, the viewer can participate. The sphere is not fixed, but rests on an almost invisible ring. Thus it can be moved into any position - with surprising consequences. Depending on how the sphere is turned, the expression of the face seems to change.

This not only opens up new visual experiences for the viewer, but also gives him the opportunity to shape the effect of the artwork.
As with the angelus series, I painted 30 versions. But I liked the concept so much that I started to paint more spheres with other faces.

In connection with my Renaissance project, I created other, mostly smaller works that could also deal with other artists.