Lena Dressed in Blue, oil on a cocave mirrored plexi dish, 110 cm, 2015
Since the work is painted on a concave mirror dish, no photo can give an impression of how the work changes when the beholder passes by. The impression of the whole work is constantly changing as a result of permanently shifting distorted reflections of the space surrounding the dish. More, the painted figure seems to be animated as well, perhaps because our eye and brain cannot process the perception of an image deriving from a solid object in which parts change dynamically and others remain stable.
The concave mirror background produces spectacular grotesque reflections. The awe it produces resonates with the Baroque concept of the world as theatre and humankind as actors in a grand play. 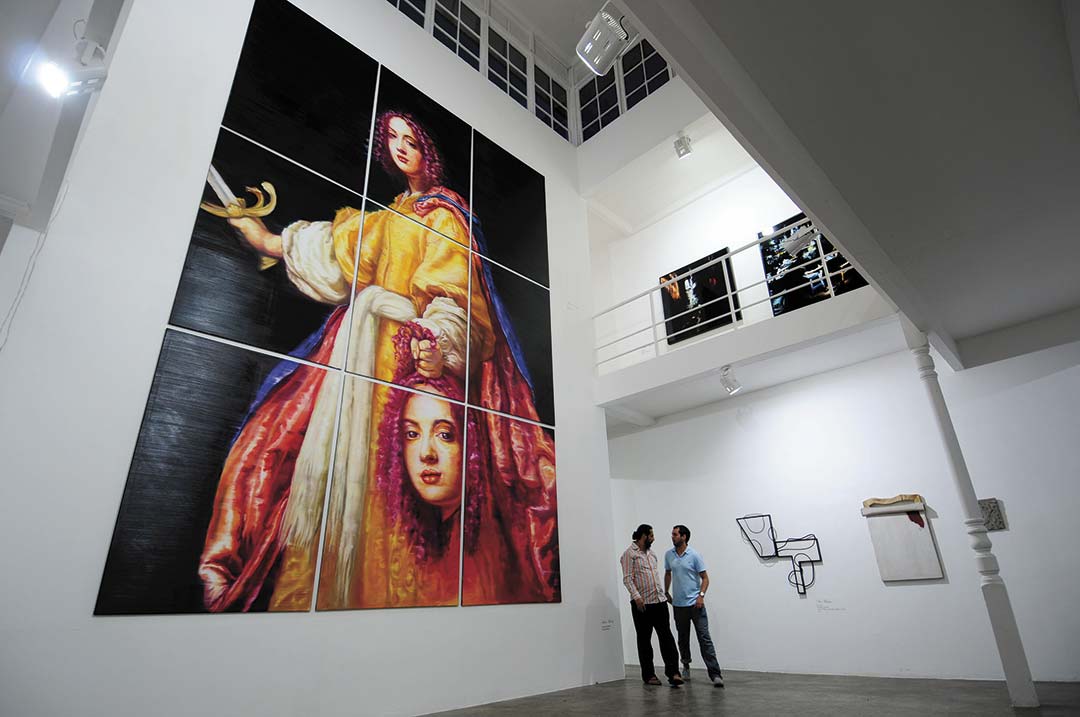 At the age of 16 I had the dream of making a large-scale old master-style painting once. Coming of age in Salzburg, a beautiful town in Austria with an amazing number of richly decorated baroque churches.

I was deeply impressed by their large and powerful altarpieces . The big-sized paintings tell their story with great expression, inner dramatic movement and  rich colouring in great painterly perfection.

So far I could only fiinish a few paintings of this series, but I hope to do more in the future. In the end, there should be 30 small panels. This number worked very well for my Renaissance series and seems sufficient to achieve my intentions.

It's not just about the pleasure of repeatedly engaging with a wonderful and timeless masterpiece of art history, getting to know it even better, and having an intimate exchange. The desire to work again and again with one and the same motif under constant basic conditions (always the same section of the original is chosen, also the format and the painting ground remain the same) arises from an experience of inadequacy and incompleteness.

A single painting is often not enough, hardly done it is already outdated. Perceptions and sensations change quickly, not least through the experience of seeing and painting.
In daily life, only one image, for example of a face, is usually stored as a survival strategy against overstimulation and overinformation. It is used for quick recognition and remains unchanged over a surprisingly long period of time even with people who are close to you. There are then always moments that lead to an update. For example, if you have not met a person for a long period of time, you see them again more consciously and update the inner image that you have stored for quick and daily recognition.

If you resolve to see a person in a new and curious way every time you meet them, you will make amazing discoveries and be surprised at how many faces a face can show and how strange it can sometimes seem.

For a painter, attentive seeing and vigilant processing and interpretation of visual information is the basis and prerequisite of his work.
So I deal with a motif over and over again not because I am unimaginative, but because I want to account for my perceptions and sensations that I make during the viewing at the time. The experiences that I make then ultimately lead to the fact that I see the motif anew and the process restarts.
Diego Velázquez, Portrait of Juan de Pareja, 1649-50 (Metropolitan Museum of New York)